Aliyah of the Mind: Zionism as Jewish Emanicipation 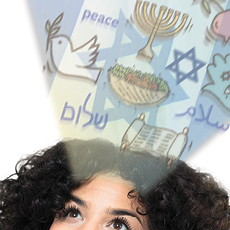 Most people think Zionism is about supporting Israel. But really it means something much deeper: It’s about building and doing and Jewish pride. It
was launched a century ago as a revolution against the stagnation of Jewish life and in the face of increasingly dangerous antisemitism. Dr. Hazony
will focus on both public and educational aspects of this new approach to promoting Zionism and Jewish values in the 21st Century. Hazony finds that
the way to attract today’s young people to Zionism is to connect them with the vibrancy and creativity of contemporary Israeli culture. He will explain
how he thinks this can work and why it is important for the future of Zionism.

Dr. David Hazony (Ph.D. The Hebrew University of Jerusalem) is the executive director of The Israel Innovation Fund. He served as Editor-in-Chief of Azure
in the early 2000s and as founding editor of TheTower.org based in Washington DC. He has authored, edited, or translated several volumes on Jewish
and Zionist thought. His book The Ten Commandments (Scribner, 2010) was a finalist for the National Jewish Book Award.

Brought to you by: The Arizona Center for Judaic Studies, Shaol & Louis Pozez Memorial Lectureship Series

View all posts by: Jackie Schmidt